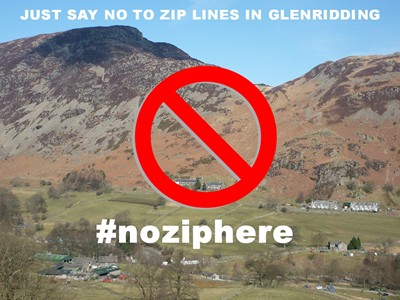 Please help us protect YOUR National Park and OUR local community 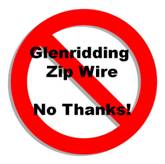 There is only one certainty - if you do nothing then this WILL happen.

The meeting was held at the Glenridding Village Hall and attended by over 140 local residents angered at the proposals. They heard a passionate opening address from local resident Graeme Connacher (see below) and then presentations from Mike Turner from Tree Top Trek and Richard Leafe, The Chief Executive of the Lake District National Park. Following this there was an open Question and Answer session with the audience.

Despite repeated requests neither Mike Turner or Richard Leafe agreed to “walk away” from the proposals there and then but they did agree to abide by the majority decision of the Community Vote now taking place regarding the proposals.

SO NOW’S YOUR CHANCE TO END THIS NONSENSE - PLEASE VOTE NOW!

The Community Poll is open to everyone resident in the Parish over the age of 16, and those with property or business interests in the Parish. If that isn’t you you can still help by SIGNING THE ONLINE PETITION

Key Points from the Meeting

Below are the key points from the meeting from my side. You can also see an excellent article in the Cumberland Herald and the report on BBC Look North using the links above. Please note these are my take on it and are not intended to be formal minutes of the meeting!

Points from the Audience

There was an excellent opening address from local resident Graeme Connacher - Click here for the full text. You can also Listen to Graeme’s Speech. “I do not relish a long battle of stress and emotion affecting our community over Christmas and the New year. We all need a break before gearing up to handle the thousands of visitors depending on us, and we on them, for next years trade. Ullswater is an amazing adventure of life and beauty. Let's keep it that way.” This was met with thunderous applause from the audience.

John Gay made also made a passionate speech highlighting the LDNP’s own advice statement that this proposal was “unacceptable as a matter of policy principle” due to it’s position in the open countryside, a view also shared by the Chair of the LDNP. He repeatedly asked Richard Leafe to therefore state now that he was against the proposal on these grounds alone but he refused to do so.

During the “Q&A” session the following points were made:

It was strongly stated that Richard Leafe’s claim that the Mine was “unsafe” and money was needed to stabilise it was a threat. In actual fact it was proved that Glenridding, thanks to the money generated from the car park (£334k in the last 3 years), was a NET CONTRIBUTOR to the National Park finances, and actually any money required to stabilise the mine would be met by the Coal Authority and not the National Park

It was also stated that the debate should not be about money. It was about the real people that live and work in the Dale and if the proposal went ahead some have already said they would leave the village, which would have a harmful effect on the community, not least on the local school which could face closure.

Various local business owners reiterated the points made by Graeme Connacher that this would have a negative impact on the local economy. Visitors come here because it is not Windermere or Keswick. Nothing wrong with those places but they offer a different visitor experience. People come to Ullswater again and again and stay for days and weeks because of the peace and tranquility. They would go elsewhere and all we would have would be people who would come, park, zip and go - which would be of zero benefit to local shops, pubs, cafes, Hotels, B&Bs and holiday cottages. Indeed one holidaymaker staying in the valley stated that he and his family returned year after year because the valley is as it is - and would go elsewhere if this proposal was implemented. See more on the views of the local businesses.

It was suggested several times to Richard Leafe that this sort of installation would have an a negative impact on any bid for World Heritage Status. Indeed when the Guardian Newspaper reported on the recent bid it used a picture of the Ullswater Valley to highlight the report. It’s unlikely they would have used that had 4, mile long zip wires had been installed.

There were several heartfelt contributions from residents at Brockhole in Windermere who had spoken at the previous meetings and shared with the meeting their experiences of the planning process where their views were not fairly taken into account.

One of the people involved in the recent Ullswater Valley Planning process which was cited by Richard Leafe, read out the stated aims of the Valley Plan which had been agreed by the LDNP and which emphasised the need to ensure the peace and tranquility of the Ullswater Valley was maintained to ensure it remained a top destination for visitors.

One visitor from Coniston stated that he had initially been optimistic when Richard Leafe was made head of the LDNP but has lost faith over the intervening years. This was another example of a bad judgement call by the Park - he felt that other far more suitable sites were available for this type of attraction, including in fact Coniston itself.

It was suggested that the Park’s financial worries could be eased by levying some sort of visitor tax as was done very successfully in some of the National Parks in America although this idea was rejected as unworkable by Richard Leafe.

Mr Leafe was questioned by a resident of the Dale, who is a recently retired EU ambassador, as to whether “you know in your gut that this is directly contrary to every policy in the book”. Obviously Mr Leafe did not!

Richard Leafe was asked on several occasions why he could not see the clear conflict of interest that existed between the LDNP as both the land owner and the people who approved any planning application - “judge and jury” as he himself called it. He repeatedly said that this was not an issue as the Park dealt with this sort of issue all the time. This was not reassuring to the audience.

At the end of the meeting a straw poll was held and NOT ONE of the audience put their hand up in favour of the proposal.

Mike opened by saying that he agreed with 95% of what Graeme Connacher had said.

He stated that reaction at the first open meeting and at the Ullswater Association had been mixed but conceded at the Second meeting the 60 people present had been against it. However with 500 people on the electoral roll obviously there were plenty of people who had yet to express an opinion (Editors note - there are actuallu only c. 380 people on the current electoral roll)

He conceded that a zip wire installation would make noise and have a visual impact (although the wires themselves are thin), and it would cause additional traffic although initial estimates said that only 80 additional car parking spaces would be needed for 30 days of the year.

Mike reiterated that he would stand by the result of any community vote and if the community voted by a majority against the zip wire then he would look elsewhere.

MY RESPONSE TO MIKE

I am not against Zip Wires in general and believe that there is a place for them in the LDNP. I have full respect for Mike and what his company has achieved BUT Glenridding is not the place for such an attraction. It IS scenic - just ask the 500k visitors a year who come here. We HAVE analysed the economic impact and it would be negative - just look at the views of the local businesses.

So please vote now or sign the petition and let’s put an end to this now.

Richard started by giving some background about himself, stating that as President of the Lake District Ski Club based at Greenside he was passionate about the area and wanted to maintain good relations with the people of Glenridding.

He then went on to say that as well as preserving the landscape, the core aims of the LDNP were to promote a prosperous economy and vibrant communities.

He the said that the LDNP was under huge funding pressure, with a 40% (£2 million) reduction in Government Funding.

He said that he was happy that there was no conflict of interest between the LDNP being “judge and jury” in this matter as they faced issues like this all the time and there was a well defined legal process for dealing with this.

He pushed the notion of the Lakes as the “Adventure Capital” on the UK and stated that zip wires and other type activities are what people wanted in the modern age.

He also stated that he personally had no feelings about the proposal one way or another - a point contradicted by one local resident who reminded Mr Leafe that he (Leafe) had personally called this resident earlier in the year  to try and “sell” the idea to him.

MY RESPONSE TO RICHARD

I believe Richard seriously misjudged both the mood and nature of his audience. He had a golden PR opportunity to win over both the local residents and many others by demonstrating that he was willing to listen to local feelings and also to reaffirm his personal commitment to the fundamental objectives of the Park. He could quite easily have stopped the proposal in its tracks. Instead, unfortunately, he came across as obsessed with revenue generation and commercial exploitation of Park assets under the rather patronising guise of it being “what the people want”. It’s not, and he’s in real danger of finding those very people asking some serious questions about his role and his position. In the meantime we as residents on Glenridding will focus right now on securing victory in our Community Vote.

So please vote now or sign the petition and let’s put an end to this now.